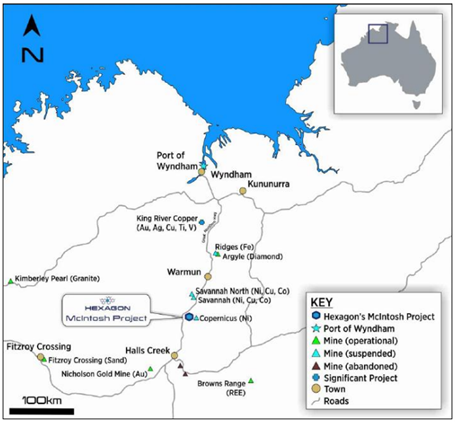 On 14 February 2022 Hexagon signed an Earn-in Agreement with Green Critical Minerals Pty Ltd (GCM) giving GCM the rights, based on certain milestones being achieved, to develop established Graphite Mineral prospects at McIntosh. This deal is intended to unlock value from the considerable past investments on Graphite at McIntosh made by Hexagon. Hexagon holds a combined total Graphite JORC resource of 23.8 million tonnes, grading 4.5% TGC, with 81% indicated, at McIntosh.

Metallurgical test work on bulk samples and considerable project development assessments (mine design flow sheet developed etc) were undertaken in the past by Hexagon for Graphite at McIntosh. GCM plans to take all this work forward within the current Graphite market context through a Graphite focused company, either through an Initial Public Offering (IPO) or a Reverse Take Over (RTO). The milestone timing for this company to be established by is September 2022.

Hexagon has the option through the agreement struck, if milestones are not met by GCM, to buy back the Graphite mineral rights. 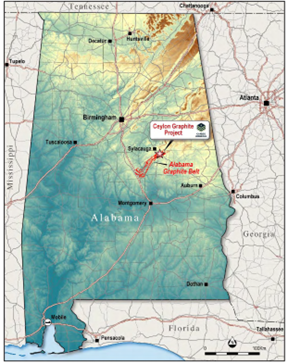 a). Negotiation of a contract with North Carolina State University to process approximately 1 tonne of ore and produce around 15 kilograms of concentrate to confirm metallurgical recoveries, grades, and other parameters. This information is to then be used to develop a conceptual flow sheet and complete mass balance and water balances and based on South Star’s Santa Cruz Graphite plant and project development experience, further detail Ceylon’s development plan.
South Star Battery Metals Announces Small-Scale Pilot Metallurgical Testing Program for Alabama Graphite Project (TSXV Announcement, 3 May 2022).

b). South Star also plans to test representative ROM samples and concentrates for physical and chemical characteristics, including using QEMSCAN, to better understand the Ceylon deposit’s mineralogy and contaminates.

c). A contract to start a value-add testing program covering the concentrates general characteristics for purification, micronisation, expandability and suitability is also being progressed with the aim of establishing the Ceylon project graphite’s use in different battery technologies. 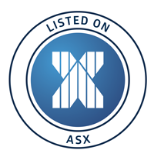